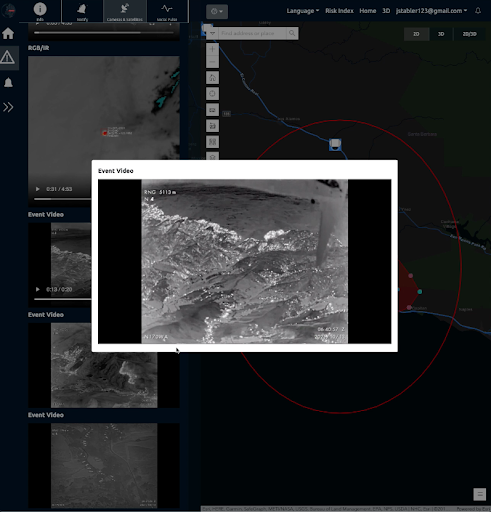 Mayday’s industry-leading real-time platform runs on an Artificial Intelligence fusion engine which automatically ingests and processes data from a wide variety of data sources. As such, the engine instantaneously merges imagery, real-time 2D and 3D visualizations, disaster propagation modeling and “before-after” analyses—all via a single platform.

Long-endurance UAS have a number of advantages for disaster mapping when compared to high-altitude sensors and manned aircraft. For example, they can be deployed rapidly, in a targeted manner – when and where they are needed, and for as long they are needed (virtually continuous site monitoring). With their Vertical Takeoff and Landing (VTOL) capabilities, they can be leveraged in difficult weather and geographical conditions. Moreover, the increased fidelity that can be achieved by the use of UASs (with sensors simultaneously collecting electro-optical and thermal infrared full-motion video, LIDAR, etc.) comes at considerably lower cost compared to some traditional monitoring systems, like manned aircraft or some satellite constellations

“We are elated to announce this partnership and are truly impressed with Overwatch Aero’s developing capabilities. Unmanned systems are slated to become essential tools in the life cycles of risk and disaster intelligence services, globally. And we see this alliance as a strategic one, given the amazing disruption slated ahead with Overwatch for this industry, in a very similar fashion to what Uber and others have done for the transportation industry.” said Kian Mirshahi, CEO and Founder of Mayday.ai.

“Overwatch Aero is excited to partner with Mayday.ai to provide pertinent on demand data to customers throughout the region. By using Overwatch Aero’s large-scale, long-endurance unmanned systems, unique Federal Aviation Administration approvals and state-of-the-art sensors, Mayday.ai gains high-definition data in real-time to drive disaster models and inform decisions. Mayday.ai’s multimodal approach to disaster identification and response is the perfect use case for our unique fleet of unmanned systems, and we are thrilled to provide data collection and dissemination services to the effort.” outlined Jordan Hahn, CEO and Co-Founder of Overwatch Aero.